Mr. Bonamo has been a licensed attorney with the Florida Bar for 27 years. He is an AV-rated attorney by Martindale-Hubbell. He is Partner at the Rice Law Firm, located in Daytona Beach, Florida. His practice areas are concentrated to Marital & Family Law and Criminal Defense. Mr. Bonamo is considered a Specialist in the area of Marital & Family Law, and he has been a Board Certified Attorney by the Florida Bar in the area of Criminal Trial Law for 20 years.

Prior to going into private practice, Mr. Bonamo was a prosecutor for a total of nine years, having worked as an Assistant State Attorney for the 7th Judicial Circuit of Florida, and was also an Assistant United States Attorney for the United States Attorney's Office, Middle District of Florida. Mr. Bonamo handled and tried all types of criminal matters, including homicides, career criminal prosecution and complex white-collar / fraud cases. He served as a Supervising Attorney in the Felony Trial Division for several years. While a state prosecutor, he was also an Adjunct Professor at Daytona Beach Community College teaching in the areas of criminal and constitutional law. 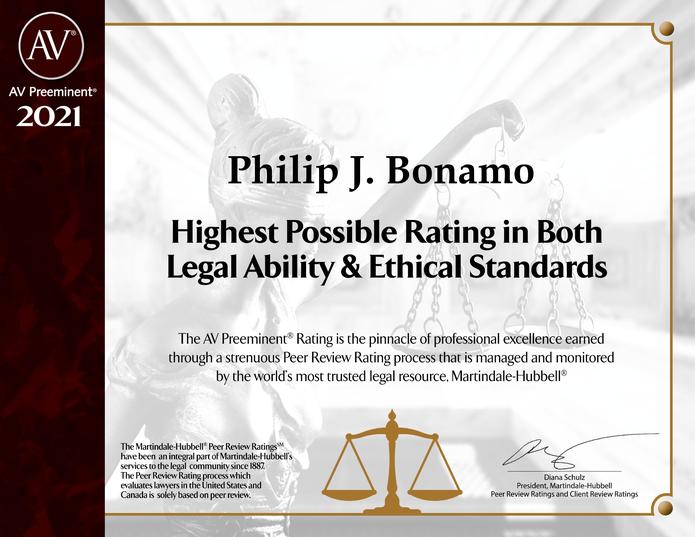 Criminal Charge Stacking: Everything You Need to Know
Philip J. Bonamo, Esq. - Florida Board Certified Criminal Trial Law Attorney
If you’ve been charged with more than one crime, you may be experiencing criminal charge stacking. Continue reading to better understand what criminal charge stacking is and how it could affect you. Read More

Florida's Alimony Reform Bill Update
Philip J. Bonamo, Esq. - Florida Board Certified Criminal Trial Law Attorney
On June 17, 2022, the ‘Alimony Reform Bill’ that passed both chambers of the Florida legislature this past legislative session, was sent to Florida Governor DeSantis’ office for review. The Governor has until the end of this month to approve the bill and make it law, veto the bill, or if the Governor does not take action either way, it will automatically become law in Florida, effective July 1, 2022. Read More
Read More Articles By Philip J. Bonamo