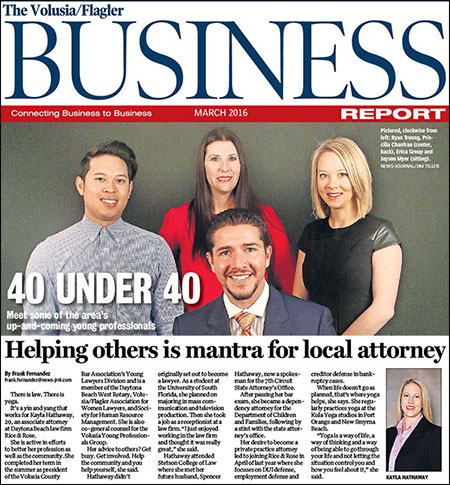 There is law. There is yoga.

It's a yin and yang that works for Kayla Hathaway, 29, an associate attorney at Daytona Beach law firm Rice & Rose.
She is active in efforts to better her profession as well as the community. She completed her term in the summer as president of the Volusia County Bar Association's Young Lawyers Division and is a member of the Daytona Beach West Rotary, Volusia/ Flagler Association for Women Lawyers, andSociety for Human Resource Management. She is also co-general counsel for the Volusia Young Professionals Group.

Her advice to others? Get busy. Get involved. Help the community and you help yourself, she said.

Hathaway didn't originally set out to become a lawyer. As a student at the University of South Florida, she planned on majoring in mass communication and television production. Then she took a job as a receptionist at a law firm. “I just enjoyed working in the law firm and thought it was really great,” she said.

After passing her bar exam, she became a dependency attorney for the Department of Children and Families, following by a stint with the state attorney's office. Her desire to become a private practice attorney led to joining Rice & Rose in April of last year where she focuses on DUI defense, employment defense and creditor defense in bankruptcy cases.

When life doesn't go as planned, that's where yoga helps, she says. She regularly practices yoga at the Kula Yoga studios in Port Orange and New Smyrna Beach.

“Yoga is a way of life, a way of thinking and a way of being able to go through your life and not letting the situation control you and how you feel about it,” she said. 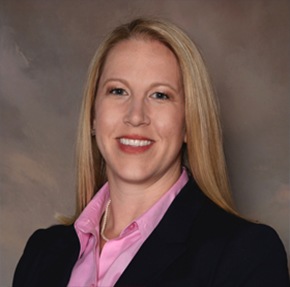