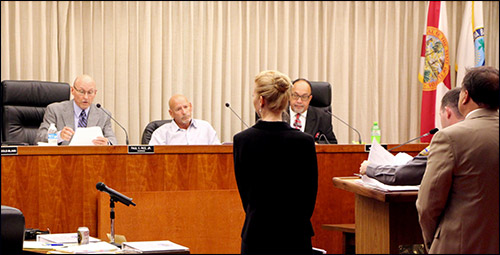 Nuisance abatement boards are established by individual municipalities under an enabling statute written by the Florida legislature. Generally, cases are brought by the City’s Police Chief against property owners whose properties were alleged to be the site of repeated drug, prostitution and other enumerated criminal offenses. The board serves in a quasi-judicial capacity, and the chair must be a licensed Florida attorney. Mr. Rice, as chair, conducts the proceedings and rules on admissibility of evidence and legal objections.  There are seven board members, with six being appointed by the six city commissioners and the chair chosen by the mayor. The board receives legal counsel from a city attorney assigned to the board.
In the case involving the Heritage Inn, the attorney for the property owner and the police representative reached an agreement prior to the commencement of the evidentiary hearing. After a lengthy public discussion and with some modifications to the agreement required by the board, the motel was declared a public nuisance and ordered to take numerous measures to abate the nuisance. A formal order will be entered against the property which will be in effect for one year.