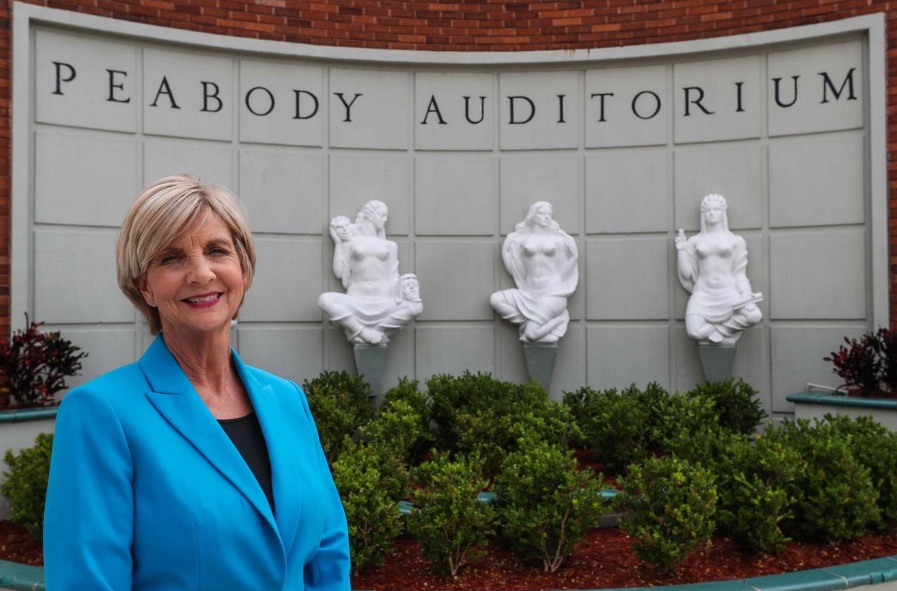 Beth King remembers graduating from Seabreeze High School in 1972 on the stage at the Peabody Auditorium. She recalls seeing Black Sabbath there in the ’70s, plus performances by Gregg Allman and the London Symphony Orchestra.

“I’ve seen many, many productions at Peabody. I grew up with Peabody Auditorium,” said King, an attorney at Rice Law Firm and president of the Peabody Foundation.

The foundation, a nonprofit with a mission to support the city of Daytona Beach’s venue, will celebrate the Peabody’s 100th anniversary with a gala event Thursday that includes a performance of the touring Broadway production of “The Sound of Music.”

It’s the first in a year of celebrations planned to commemorate a facility King called a “landmark building in the heart of Daytona Beach beachside.”

The original auditorium broke ground in September 1919 on “a day of days in the history of the town,” The Daytona Morning Journal reported, according to a 1960s article in The News-Journal obtained through the Halifax Historical Museum. When the venue was completed in 1920, Vice President Thomas Marshall attended the dedication.

Among the star-studded lineup that has performed on Peabody Auditorium’s stage are Louis Armstong, Elvis Presley, the Beach Boys and Willie Nelson. Jerry Seinfeld put on a comedy routine there just last year. And children from across the region have danced across its stage each December with the Civic Ballet of Volusia County’s presentation of “The Nutcracker.”

Lorraine Noronha, a board member of the Civic Ballet, said the kids who participate in “The Nutcracker” don’t usually get to perform in front of an audience of up to 2,500 people before coming to Peabody Auditorium. Her 16-year-old son has taken part in the holiday tradition four times and her 14-year-old daughter has done it twice.

“I do think that the best emotions and the best responses are from the younger kids because they have never been in a venue like that,” she said. “The younger kids are just in awe.”

Musicians from around the world have played there, including once-regular appearances by the London Symphony Orchestra. The Daytona Beach Symphony Society also hosts its seasons there. This year’s season included a concert by the Shanghai Opera Symphony Orchestra as well as a performance of “Swan Lake” by the Russian National Ballet.

“The acoustics are fabulous there. There’s really not a bad seat in the house,” said Christine Gerhardt, managing director of the Daytona Beach Symphony Society. “You can sit anywhere and the sound projects everywhere.”

With the next hundred years in mind, King said improvements are planned.

“We’re interested in enhancing the patron experience and preserving this cultural treasure — this historic building — and expanding the offerings to the community,” King said.

That’s good news to Fayn LeVeille, the director of the Halifax Historical Museum and another lifelong fan of the Peabody.

She has thoughts about what Simon Peabody — a winter resident who made his fortune in timber and died in 1933 — would think of the building that still bears his name.

“Personally, I think he’d probably love it,” she said. “To find out that it has grown in stature actually and serves so many people.”