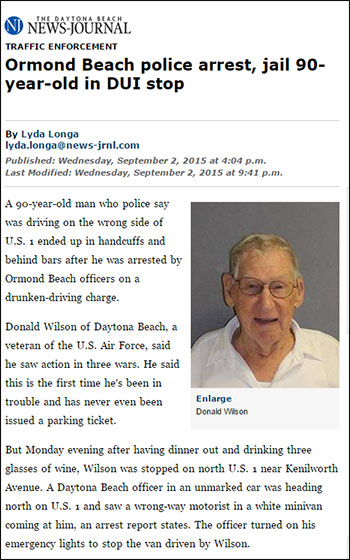 When asked if the officer could have used her discretion and not arrested Wilson because of his age and lack of a criminal record, Ormond Beach police Chief Andy Osterkamp said every officer can use discretion when deciding to make an arrest.
“In this case the offi­cer decided to make the arrest,” Osterkamp said in a telephone interview Wednesday. “The law says that when someone is DUI, they have to be arrested, no matter how old they are.”
The chief also said that included being hand­cuffed. Osterkamp said if Wilson had asked for his handcuffs to be loosened, the officer would have done so.
One veteran defense attorney who specializes in DUI cases disagreed officers have the discre­tion to arrest or not arrest. Flem Whited said “officer discretion” is no longer a practice used by law enforcement, especially younger officers.
“Those days (of offi­cer discretion) have long since passed,” Whited said Wednesday. “There is nothing that you're tell­ing me that I don't hear three times a week.”
The attorney said he believes the mentality held by many officers these days is “quasi-mil­itary.” Gone are the days when a cop might drive someone home if they've imbibed a little too much. Whited said that was common when officers stopped a colleague, for example. But these days officers are arresting their own, as well.
“It's a tough world today — there's no break for Jake,” Whited said.
Wilson says he under­stands that and is not asking for a break. He just thought the hand­cuffs were a bit much: “I thought there should have been some consideration because of my age.”